Eric has worked for the Police Department since August 1998. He was promoted to Captain in July of 2017, he previously held the positions of patrol lieutenant, patrol officer, and was the SRO at Westview from August 1999 until October 2004. Eric has received training in several areas including: The Law Enforcement Training Academy, Officer Survival, QUAD, Interview & Interrogation, and Tennessee Law Enforcement Executive Development Seminar (TLEEDS). He is currently one of the Crisis Negotiators at Martin P.D. as well as a Domestic Violence and Emergency Vehicle Operations Instructor. He is a graduate of the Southeastern Leadership Academy (SELA) held in Chattanooga. Eric graduated Henry County High School in 1989 and continued his education at the University of Tennessee at Martin where he graduated with a B.S. in Criminal Justice in 1997. Eric obtained his M.S. in Criminal Justice from Bethel University in McKenzie in 2015. 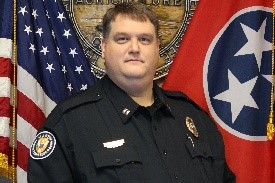